Back to all news

How can Modern DevOps approach help you?

Traditional companies have the foundations of their IT departments in the 80s to 90s, strongly process-oriented and often in the form of dedicated teams for individual IT resources, such as storage, networking, security, infrastructure, and so on.

Traditional companies have the foundations of their IT departments in the 80s to 90s, strongly process-oriented and often in the form of dedicated teams for individual IT resources, such as storage, networking, security, infrastructure, and so on. Users who need these resources will request them using tickets. These requests will be processed by a team member. This ticket resource management suffers from many ailments. There is still a chance, that the team member may misunderstand the request. Resulting in not delivering it in the required quality or make a human mistake, for example in the form of a typo.

Processing more complex requirements consisting of a combination of these resources multiply these problems at a higher level – individual teams have different priorities, motivations, and discipline. It takes an extremely long time to complete a more complex request. The difficulty of obtaining resources for your project creates the preconditions for creating a “gray” infrastructure, such as a server thrown somewhere in the office with the latest Docker installed, and so on, because it is “faster”. At the same time, there is a need for some kind of handlers whose job it is to push for tickets to be dealt with, often through a personal visit and standing over a person until they have met the request. This leads to a loss of motivation of the people in the teams. All-day long, they only deal with user requests, and therefore a kind of operation, often someone goes to them, with the fact that they need “this” and “now”. So it’s easy to work a lot, but without the substance of the matter being solved more systematically. As a result, it can take weeks to months to make changes or deploy new environments in which new applications will run. This is a big difference compared to the hypothetical fintech startup from Asia, which can deploy its application twice a day without disrupting the operation of the service, and thus converge faster to the required functionality.

However, DevOps itself is only the culmination of the “agilization” of the organization, and the effort to run it in a traditional corporate environment is doomed to failure because the transaction costs of obtaining an IT resource are high.

The term DevOps is often misused only as a trendy name for the old administration team. The DevOps concept arose from the need for a quick response to the rapidly changing situation in young Internet startups.

Its beginnings go back to companies such as Facebook and Google, respectively, which grew extremely fast – they gained daily about of million new users who wanted to use the service, which put enormous pressure on a rapid sequence of changes. Technologies and processes that have worked with fewer users quickly stop working and need to be changed. Therefore, operating during such growth looks more like changing the engine and wheels on a car at full speed on the highway without interrupting operation.

Among the main benefits of implementing the DevOps principles, we consider: 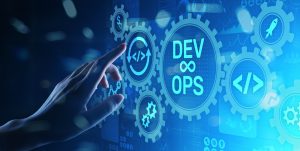 The implementation of modern DevOps requires the fulfillment of certain prerequisites:

You can find out more about which cookies we are using or switch them off in settings.

This website uses cookies so that we can provide you with the best user experience possible. Cookie information is stored in your browser and performs functions such as recognising you when you return to our website and helping our team to understand which sections of the website you find most interesting and useful.

Strictly Necessary Cookie should be enabled at all times so that we can save your preferences for cookie settings.

If you disable this cookie, we will not be able to save your preferences. This means that every time you visit this website you will need to enable or disable cookies again.